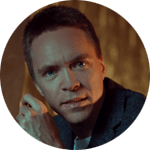 Mykhailo Korbakov started his career in 2003 as a researcher in academic Space Research Institute. After spending five years working on satellite imagery processing, numerical weather prediction, and wiring it into the network of distributed services he decided to move into more business-oriented domains and moved to commercial software development where continued working on data warehouses and machine learning models for various applications. A few years later he accepted an offer for the position of Software Architect in fresh company Nimble CRM targeting to disrupt CRM market. He is spending the last 8 years in that company, now at the position of the Director of Engineering. That long exposure gives a good oversight of how various technical decisions affect business in the long run, both in good and bad ways.

In my speech, I want to make a connection between DevOps practices and more or less formal software architecture. Despite widespread perception of architecture as "enterprisy" and DevOps as agile, there is, in fact, no conflict between these two areas. I want to draw a line between various DevOps practices and architectural quality attributes influenced by them. Such influence happens to be obvious in some cases and non-intuitive in other, and that is a deep topic for a discussion. I will make a special focus on reliability as this attribute is affected by DevOps decisions with the biggest amplitude and in the ways that sometimes are not well-understood.